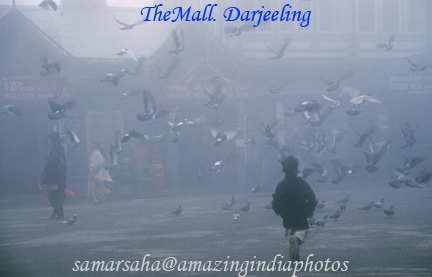 one more time even if I have to visit in the chilli winters. Finally this winters I had my wish fulfilment. The temperature was fluctuating between 5-6 degrees in Darjeeling when we finally reached the ‘Queen of the Himalayas on 29th Dec 2015. ‘It was a three and a half hours journey by car from NJP railway station to Darjeeling by the Hill Cart Road with occasional halts in some food joints for hot, steaming Momos and tea. But it is advisable not to indulge in the luxury of victuals during such long winding journey up the mountains.

A panoramic view of the mountains from the hotel window with fuming hot cup of coffee was heavenly bliss. In fact there are a number of good budget hotels available near the TV Tower that gives a spectacular view of the majestic Kanchanjungha. During the winter months there is a shortage of water in the town, so choice of hotel is quite vital.

During our 4-day stay in Darjeeling we touched quite a few of the places of tourist attraction although I had visited all of them previously on several occasions in my childhood. The Mall or Chowrasta is still a cosy haunt with teeming crowd occupying every seat of the benches fringing the Mall area. On one side   the curio shops displaying   local, and traditional art work and various antiquities and on the other one may have a feast for the eyes looking at the grand view of the surrounding range of mountains. A huge concrete stage has been built recently at one end of the Mall with a huge giant TV screen showing various programmes from time to time for the sole purpose of entertainment. In front of the stage there stands a golden statue of the famous Nepali poet Bhanu Bhakta, who had translated the Ramayana in Nepali -way back in the nineteenth century. 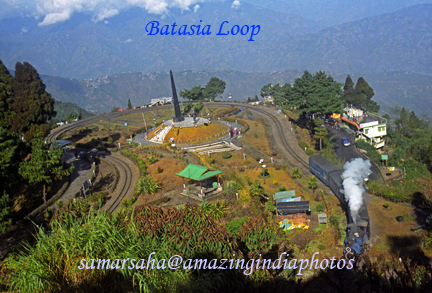 There are Bhutia markets on the way to Mahakal temple north of the Mall as well as on a narrow road originating from the Mall again, displaying woollens of varied prices and qualities.

It was a quiet, silent and dark taxi booth of Darjeeling at the early hours (3 am) of the second day when we had planned to have a tryst with the sun and Kanchanjungha at the Tiger hills. The temperature at the hilltop was ranging from  -2 to -3 which was almost unbearable without the hot fuming  cup of coffee with which we were greeted at that early hours of the day ,and the cosy & comfortable seats  inside the  view tower  .We were told by our taxi driver that  the earlier one reaches the better because soon   long queues of  jam-packed cars on  the road would be lined up forcing one to walk all the way to the hill summit in  chilli cold weather . The Tiger hill is 11 km from Darjeeling and it is the second highest point in the district 2590m ,the first being Sandakphu which is 3636m.It is indeed a life time experience to see the breathtaking view of the sunrise and the simultaneous reflection of the ever changing shades of light on the grand Kanchanjungha. We were lucky enough to get a glimpse of the tip of Mt Everest which -we were told by the locals- is only possible when the weather is at its best. After having spent about two hours we went down to Ghoom and revisited the famous Ghoom Monastery. From there our next destination was the Batasia loop and once again we had a feast 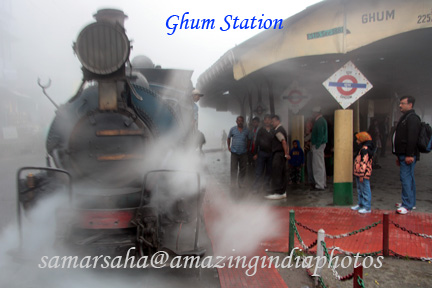 of our eyes with the lofty Kanchanjungha displaying her lavish beauty. The heritage toy train was waiting there to start its first joy ride.Infact there are regular 2-hour joy rides offered by the Darjeeling Himalayan Railways on its toy trains from Darjeeling. The tickets have to be booked either online or from IRCTC counter. The tickets are Diesel Engine Rides: Rs. 625/-. All are first class seats.

We got our entry tickets for the loop from the counter near the entrance .But before that for breakfast we gorged on fried bread pakoras and sandwiches with hot cup of tea which is readily available everyday near the loop entrance.

Our next target was local sight- seeing .Now a days one doesn’t need to walk 2kms taking some 30-35 minutes to reach Darjeeling Zoo & HMI (Himalayan Mountaineering Institute) from Mall area.  Battery operated cars have been introduced by GTA (Gorkha Territorial Administration). The cars start from Bhanu Bhawan (i.e. the large building of Gorkha Ranga Manch on Mall road) and make several round trips to HMI/Zoo.  The cars operate between 10am to 4pm for the Zoo/HMI. Each car can accommodate up to 8 persons and the per person rate for a round trip to the Zoo/HMI is Rs. 20/-.Both the places are well maintained .We got a glimpse of one of the rarities –the Red Panda in the Zoo. There is a fairly good eatery inside the Zoo serving snacks, ice creams etc.

The next day was kept for the botanical garden of Darjeeling. 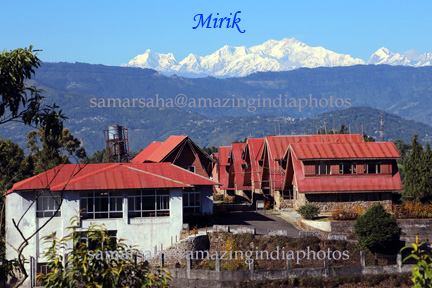 To be frank, it was not at all worth the pains taken. The next day’s destination was 49 km from Darjeeling, a quiet hilly town- Mirik, yet another place where I had spent 4 memorable years of my life way back in 1967 to 70. On the way we halted for a cup of tea in a shop near ‘Gopal Dhara Tea-estate’ and’ Seemana’ ,the border hill between India and Nepal. Nepal made sweets and drinks were found in abundance. Finally we reached Mrik. The Mirik Hospital has changed significantly; in fact the entire geographical feature of the area has had a transformation. Many 3-4 storied buildings have come up on the hillsides.  Looking at the havoc change that has come over this hilly nook I had lost all hope of meeting any of my compeers after a gap of 45 years. However by sheer luck I met one of my Nepali friends ‘Sanu bhaini” (means younger sister in Nepali language) It took few seconds to recognised each other and our joys knew no bounds! She took me to the other friends-her elder sister ‘Thulo Bhaini’(elder sister) and also the old ‘Boju’ an octogenarian. Another wish of mine was fulfilled. Exchanging phone numbers, and promising each other to meet again, we departed from there. Since we were running short of time we spent about only an hour near the Mirik lake ,did some shopping and finished our lunch before we set out for Pashupati Market (situated in Nepal) which is on the way back to Darjeeling  .We had to show our photo ID proof in order to enter Nepal area .One can reach all the way to  Kathmandu through 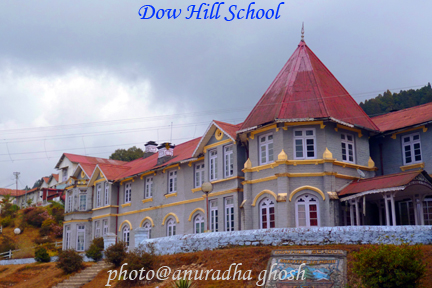 this Indo- Nepal Border road.  We had to avail another car from there for two fifty bucks to reach the market. However one can even walk the distance of about 1 km to the market. Although there was abundance of goods but one has to be careful about fake goods too. Some are too cheap to be genuine. After about half an hour the same car took us back to our previous car and by seven in the evening we were back in our hotel cosily tucked inside blankets trying our best to battle out the bitter cold of the evening.

There are plenty of private taxis available plying to and fro Darjeeling and Siliguri. We booked the middle seat and reached our last destination Dowhill, a beauty spot in Kurseong where I had spent as many as 12 long years of my formative days . Hotel Amarjit ,Kurseong is a very comfortable place of sojourn with fairly good facilities- specially the food and the room service. After a sumptuous lunch we set on to visit my old school- Dowhill School .An educational institution with a glorious history of 135 years .Situated in the midst of nature surrounded by giant pine trees and overlooking the breath taking view of the Kanchanjungha and its range of snow clad mountains , the school provides  an ideal atmosphere for teaching &learning. I was lucky to meet two of my teachers after35 years!One of them was the most respected ,loved and honoured lady-my  Headmistress Miss. 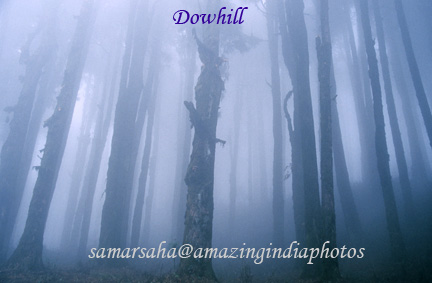 Next we visited the brother school- Victoria Boys School- which lies about a km away from Dow hill school .Both the schools were closed for three winter months. The church, the enormous play grounds, the teacher’s quarters- in fact everything came alive when I started rewinding the pictures 35 years back!

A few more kms uphill lays the Forest School   which is a training centre for forest rangers. The place has remained the same as it was 45 years back, during our stay there. The forest museum and the deer park are worth visiting. Finally we bade farewell to Dowhill and by the time we came down to the, it was already dark .Yet I couldn’t resist myself from visiting the Ramakrishna Mission, a place we used to visit almost every week. The next day we set out for NJP.  For me it was a dream tour in which I could relive the past once again.